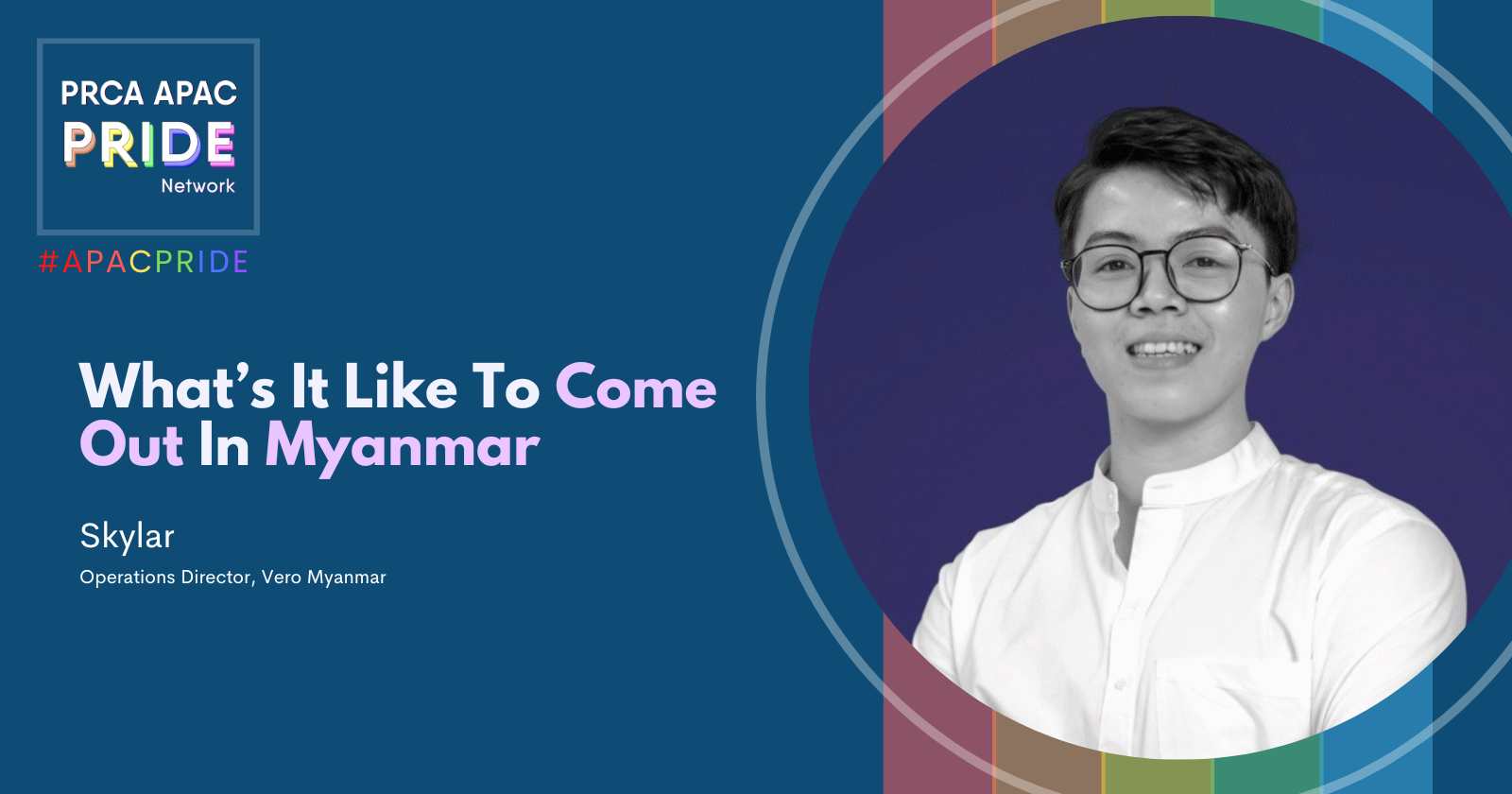 In Myanmar, the climate for LGBTQI+ individuals has improved in terms of public knowledge and societal acceptability, all thanks to the democratic political reforms that broadened the space for free expression and civil society over the last years. However, the recent political coup has destroyed the positive developments. Khine Zar Thwe, who goes by the name Skylar, tells his story on growing up as a trans man in Myanmar.

1. Can you share what the LGBTQI+ life reality looks like in Myanmar? And what should Myanmar do to support the community?

Non-heterosexuality has always been publicly acknowledged in the sphere of “nat,” or spirit worship, a sort of animism intermingled with Myanmar’s Buddhist beliefs. People in Myanmar are acquainted with the homosexual lifestyle because of trans women, who are often stereotyped as beauticians, fashion designers, and “spirit mediums” known as nat kadaw. We found that more LGBTQI+ culture in Myanmar society was generally leaning toward acceptance after Myanmar experienced its first great internet moment in 2014. International organizations have stepped in to educate the public about the dignity and human rights of LGBT persons to diminish discrimination against them in Myanmar. Over the course of years, activists, advocates, and communities have also emerged. In 2018, we celebrated our first Yangon Pride, Myanmar’s first LGBTQI+ festival that was allowed to be held in a public area by the government. However, activists noted that there is little political will to abolish the colonial-era law that criminalizes homosexuality.

The group of people working for and supporting the dictatorship and the military have a more traditional mindset than others due to being brainwashed by the military to discriminate against anyone different from them in terms of race, religion, sexual orientation, and gender identity/explicitness. They have homophobic sentiments, a poor image of transsexual people, and rampant discrimination and abuse directed at the group. We all have witnessed Myanmar’s LGBTQI+ Community Faces Death and Torture From Junta after the coup was staged simply due to actively participating in anti-regime protests. Right now, the majority of Myanmar people are fighting for one thing: true democracy. Because we recognize that if we lose this fight, our future will be much worse than anybody could have imagined. Everything we have fought for to ensure the safety of our queer community will be erased. Because only genuine democracy can improve the lives and rights of everyone in our nation, including our LGBTQI+ population, practically everyone in our country has been doing their best to achieve it.

2. As a few Myanmar transmen, what is your transformational journey and how can you be yourself today ?

I began my transition three years ago. Coming out as a trans man was not difficult for me since I spent my teenage years identifying as a tomboy, so my family and friends were used to seeing me in male clothing and with short hair.

The challenging part was really starting the transition. When I contemplated transitioning with my family, they protested for obscure reasons. It is illegal in Myanmar to get hormone replacement treatment or undergo a gender change due to a lack of medical facilities and specialists. There were never any articles or reports about it in the news or media. Those who have gone through transition were afraid to share their experiences online because of the harsh comments they would get. I had to educate myself by reading medical papers, publications, blogs, and FTM websites and watching videos of transmen in other countries on YouTube. I went through a long period of depression, insecurity, and a lack of self-confidence, worrying about dealing with people’s questions and negative remarks after witnessing the physical changes that come with the transition in Myanmar’s conservative society. Knowing what I need to do to transition is one thing; doing it is quite another. Because there was no doctor to consult during the transition period, I was fortunate to have the help of my friend’s brother, a general practitioner, to monitor, analyze my blood tests, and assist me with my initial injections.

3. Can you share about what you do to help advocate for LGBTQ+ to grow professionally even though living in one of the most conservative countries like Myanmar.

Unfortunately, and as much as I regret it, I didn’t have many opportunities to assist LGBTQ+ advocates in their professional development in our nation. When I began my transition, I kept it a secret from everyone except my girlfriend, sister, and a few of my closest friends. I didn’t even inform my parents about it. I wasn’t ready to welcome unfavorable opinions and remarks from people about my transition.  After my second year, I felt more comfortable talking about it openly due to my maturity, which enabled me to ignore the negatives and focus only on the positives. Since then, I’ve gotten messages from my peers wanting me to share my story, answer their transition-related issues, and freely discuss their plans in private.

Being a self-made entrepreneur, I’ve also been passing on my knowledge and assisting other queer businesses and queer people in Myanmar that feel trapped or stuck in Myanmar society, where stereotyped bigotry is rampant.

4. What are the most important things you want to tell LGBTQ+ communities in Myanmar?

As a peer queer, I simply want to encourage LGBTQ+ communities in Myanmar to be hopeful and to always be true to themselves. Like Chris Colfer said, “There’s nothing wrong with you. There’s a lot wrong with the world you live in.” They’ve already done an incredible job of taking the first step toward discovering who they actually are. It takes a lot of guts to be self-aware and embrace oneself. And it’s a big deal to be your authentic self anytime, anywhere especially at a challenging time like now in Myanmar. Coming out isn’t easy. Transitioning isn’t easy. Being gay in a conservative country like Myanmar isn’t easy – but keep going. You’ve got this!

Skylar is the Operations Director of Vero Myanmar, an award-winning communications consultancy with offices in Indonesia, Myanmar, Thailand, the Philippines, and Vietnam. As the head of the Myanmar office, Skylar leads both campaigns and people and is a primal driver of the agency’s effective growth in the country. In 2021, Skylar was also nominated for the Campaign Asia Young PR Professional of the Year award. Recently, Skylar has collaborated with JICA as a mentor to help Myanmar startups and entrepreneurs survive and develop their businesses, particularly in the difficult years after the coup, as part of the JICA ACCESS Booster program.