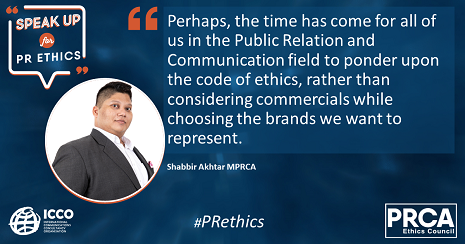 Getting the whole world to believe and behave desirably differently is a tall order. But that’s what we as PR and Communication Professionals do every day! However, this profession sometimes gets accused of possessing a loose moral fabric, and we are often thought to be spin-doctors, instead of storytellers.

For several years, cigarette brands with the help of their brilliant communication efforts had glorified the consumption of tobacco under a flimsy ethical veil of a mandatory statutory warning. Companies selling carbonated drinks had gone to great measures for that brilliant campaign, which would amp up the ‘cool’ factor and skyrocket their fortunes. Cosmetic giants have been killing whales, as the blubber is used as a primary component in various makeup products. How many of us know that ‘oxybenzone’, an essential ingredient in sunscreens, harms coral by increasing its susceptibility to bleaching?

Communicators and PR Professionals are required to be glorifying the brands they represent, with an unbiased mindset. However, when these glorified contents become one of the major reasons for humanity to sit on a ticking time-bomb, such as climate change, then it is the time for PR professionals to take a moral stand when representing products or services to the public.

More than three decades ago, environmentalists and scientists warned industries about the profound consequences of greenhouse gas emissions and urged them to act collectively and deliberately to slow Earth’s warming. The world didn’t listen! The strategies used to mislead people with anti-science propaganda and anti-environmentalism are much more developed and robust than those used to educate people about science and the environment. As a result, today we have reached the tipping point of the climatic system of our planet.

The recently published sixth assessment of UN’s Intergovernmental Panel on Climate Change (IPCC) report also confirms of “unequivocal” evidence that humans have pushed the climate into unprecedented territory and are to be blamed for the rapidly rising land and ocean temperatures, calling the consequences of that level of warming as a “code red for humanity”. Although scientists have been warning us for decades, it is shocking how little has been done by us as PR and Communication professionals to raise public awareness about the pending apocalypse.

Yet, the scientists who authored the report stresses that humanity’s actions can still determine the future of our planet. The need of the hour is the collaborative efforts of every individual on this planet to come together and take steps that will hopefully lessen the speed of this climatic catastrophe. Global warming should be a ‘call to arms’ for the us as we are supposed to be better equipped with the skills of persuasion that’s so conspicuously lacking from the existing climate change communications.

Perhaps, the time has come for all of us in the Public Relation and Communication field to ponder upon the code of ethics, rather than considering commercials while choosing the brands we want to represent. Else, they might not have a ‘target audience’ in the near future.